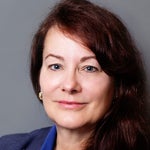 Katherine L. Maloney has been a lifelong resident of Plainfield, Illinois. Graduating with honors from Plainfield High School she was then accepted in the Open Door Exchange Program and was a foreign exchange student for one year in Cairo, Egypt and attended the American University becoming proficient in the French and Arabic languages and adapting to a new culture.

Upon her return to the United States, Katherine continued her education at Northern Illinois University. In her senior year, she was awarded the Marketing Department's Outstanding Leadership Award for her work as president of the business fraternity, Pi Sigma Epsilon.

Katherine was then accepted at the George Washington University Law School in D.C. During her attendance she was granted an internship with the Counsel for the Marine Corps Commandant at the Pentagon. She maintained her position for three years and handled issues regarding federal and international law.

After graduating from law school, Katherine returned to her hometown and began her law career at a small firm in downtown Plainfield. She practiced in many areas of the law including: family law, criminal law, workers' compensation, estate planning, real estate, small business, probate and juvenile matters. In addition Katherine began receiving court appointments as a Guardian ad Litem (court advocate) for children and disabled adults.

Katherine also became more involved in the Plainfield community. She has been a member of the Plainfield Rotary; Plainfield Cub Scouts and Boy Scouts Troops; a Big Sister for Big Brother/Big Sisters; joined the Women's Bar Association of Will County and was President for two years; and was an organizer of a New Lawyers Committee for the Will County Bar. In 1998 Katherine was awarded the Pro Bono Award for all of Will County predominately for her work with children and the elderly.

Katherine was recruited by Rathbun, Cservenyak and Kozol to open a law office in Plainfield. She became an equity partner three years later and has maintained a thriving law practice. She has successfully settled and tried cases in many areas of the law throughout her career. She has completed a Master training course in mediation and has received court appointments to mediate family law cases. She is a member of a number of professional organizations and has been selected by a Justice of the Illinois Supreme Court to serve on Judicial Selection Committees. She currently serves as a board member of the YMCA Advisory Board.

On her home front, Katherine is a widow. Her husband, Dennis Hunke, was killed in 2014 and was posthumously awarded the 2015 Carnegie Hero Award. She has two wonderful children Jacob and Jacqueline, both attending Plainfield schools.

Fill out our form below to contact us about any of our law practice areas, locations and attorneys.

Thank you for contacting us. We will get back to you shortly.

Please complete all required fields below.

We care about your case as much as you do.

In response to the stay at home order issued by Governer Prtizker due to the COVID-19 pandemic, our Plainfield office is open by appointment only. We are limiting services to phone and video conference support at this time. We are still accepting new clients and our attorneys and staff will still be available via telephone, e-mail and video conference to all of our current clients. We are closely monitoring court closures in DuPage, Will, Kane, Kendall, and Cook counties and will be in touch should there be postponements or delays in your case. Please call us at (815) 577-9763 to schedule an appointment and don't hesitate to leave a detailed message and we will return your call as soon as possible. We are here for you!